This sitting took place at the location of the Basler Psi-Verein in Basel. We were 18 sitters in the usual room on the first floor that is used for séances in Basel. Like during my last sitting in Basel about one year ago, Kai was only accompanied by one member of his home circle, but this time it was his fiancée Julia (last time, it was H. H.). She was operating the red light lamp, and opened and closed the cabinet curtain when required on its right side. Lucius Werthmüller operated the CD player and controlled the door, his partner Sabin opened the left side of the cabinet, and their son Pablo operated the fan. Most of the other sitters were Swiss and had already visited one or more séances with Kai.

Before the sitting started, Kai and Pablo invited anybody who wished to search the sitting room for any suspicious devices. One of the guest sitters did so, the others seemed not interested. After the room was searched, Sabin checked the clothes of Julia, who then entered the room as the first person. Subsequently, all persons entered the room one after the other after their clothes had been checked. Sabin checked the female guests, Pablo the male guests. The last person to be searched was Kai. Pablo “strip-searched” him separately, and followed him into the séance room after redressing. Kai went straight to the cabinet chair and sat down. Julia showed all objects in the room that might cause suspicion to the sitters, such as two spare batteries for the torch, the recorder, a water bottle, etc. In the active zone about 2.4 m in front of the cabinet chair, there were bells, shakers, and an empty bucket which was turned upside down to replace the usual drum.

The order of the sitters was as follows: 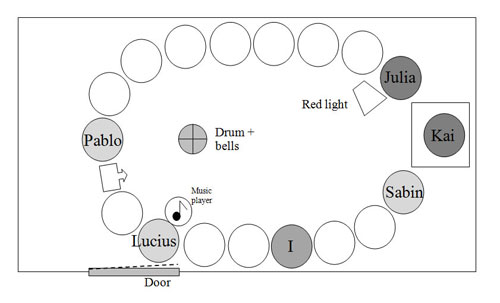 Kai opened the sitting with a short prayer and began his rapid breathing technique in darkness. It took some minutes until HB first came through. Around that time, first raps were heard at the ceiling of the room, a light was briefly seen inside the cabinet, and first touches were reported by sitters.
Throughout the next two hours, the following phenomena occurred:

In general, the chain of hands was continually requested by HB except for the breaks in between the sets of phenomena. Moreover, during all phenomena listed above, HB requested that four-limb control was installed by Julia and Sabin. In addition, HB has regularly requested that Sabin should lean over to Julia to check possible body movements of her as well. Every time, both Julia and Sabin confirmed speaking loudly that Kai’s body rested entirely motionless, and Sabin confirmed that also Julia didn’t move. Still, during the time of four-limb control, the phenomena continued seemingly undisturbed, and also HB continued to speak.

Between the touches and the greenish lights, HB has announced that two deceased individuals were present tonight. He described the first one as “Gordon”, an entity that had been present also at the last sitting in Basel the day before. This Gordon was supposed to be a former teacher of a present sitter, and he “showed” HB a picture of him emanating ectoplasm. He stated that this particular sitter would know which picture was meant, greeted the sitter, and wished him all the best. Indeed, there was a sitter who claimed that he had learned from a Gordon, and that he knew the picture in question.
No mention was made of the second deceased person . . . until it was ectoplasm time.

There was a little break during which we had to adjust the brightness of the red lamp operated by Julia to the upcoming display, making sure that Kai’s trunk was visible in the red light. Then, we were supposed to sing along with the music. Still, I could hear a few gargling sounds of the medium, indicating the production of ectoplasm. Soon after, and much to our surprise, HB asked Lucius if he had his torch ready. Lucius confirmed that he had his torch ready to be used when requested. HB stated that the second deceased person wanted to show a birthday present to somebody now. By then, I was already expecting an interesting display of ectoplasm, because the pronunciation of his words was muffled in the typical manner when HB speaks with ectoplasm being attached to the inside of the medium’s mouth. After another

while, HB requested that Lucius should come to the cabinet, that it should be opened, and that he should shine the torch onto what would be displayed. Julia and Sabin opened the curtains in the comparably dim light of the red lamp, and Lucius, standing right in front of the medium’s body, shone an additional small cone of brighter red light from his torch straight onto it. The red light revealed the most complex structure of ectoplasm I have seen in sittings with the Felix Circle until today (see the idealized drawing. In reality, the visibility of the upper part of the medium and the faces contained in the ectoplasm was impaired by the comparably dim red light from the lamp, and by the body of Lucius who stood right in front of the medium. Still, several times, I caught perfect glimpses of the entire scenario).
The curtain was opened three times. Each time, the structure seemed unchanged. On the abdominal region of Kai, two openings seemed to contain faces. Of the first face, I could mainly see dark spots indicating the eyes, the second was better visible to me. I could clearly see a smiling face, the upper teeth shining white against the dark interior of the mouth. Lucius recognized Albert Hoffman in this face, but he couldn’t identify the first face. When he asked HB who the second face had been after the last display, HB replied that it had been himself. Now, the details of this face that Lucius had seen made perfect sense, and he was certain that it must have indeed been Hans Bender, of whom he knew several photographs. It simply didn’t appear to him that HB would display himself. Moreover, the face displayed did not exactly match the photographs of Hans Bender that Lucius knew, what made its recognition difficult.

Then, the sitting was to be closed. Julia quickly spoke a closing prayer, and Kai was awakened from trance after a short backward count. Except Julia and Sabin, all left the darkened séance room and went downstairs. Later, all joined us and we had a relaxed finish of this remarkable evening.

It should be noted that Kai drank a dark coloured kind of “Ice Tea” before the sitting and during the introductory talk of the evening, but as far as we could tell, the ectoplasm was as snow white as it is has always been in previous sittings. It seemed to consist of two different kinds of states. A more cotton-like state in the outer parts attached to the cabinet curtains, and a more condensed rubber-like state that surrounded the two faces and hung down in strands at its lower end. As far as I could tell, the texture of the areas that contained the faces looked crumbled and creased. Lucius has stated that they also displayed a slight three-dimensional relief structure, so that, e. g., the nose of Albert Hofmann rose about 0.5-1 cm above the surrounding areas.

Thanks a lot, Lucius & Co., for organising this event, and of course, also Kai & Co. for making it possible!